Similar in Ubiquity to their Jaw Crusher cousins, Cone Crushers are a common feature to most quarries processing aggregates and medium hard ore.

Cone Crushers (sometimes also referred to as Gyratory Crushers) made their appearance back in 1877 as a contender to the Jaw Crusher. It was in 1881 that they adapted to a smaller size and served as a secondary crusher.

Cone Crushers are also compression based crushers, like Jaw Crushers, but also have an extra designation of 'fine-crushers' due to their ability to resize material that Jaw Crushers would be unable to achieve.

Modern Cone Crushers are a refinement of the Hydro-Cone. They are called Hydro-Cones because the bottom assembly of the Cone is sealed and bathed in oil, which lubricates the entire action up to the Mantle.

Two designs of the Hydro-Cone commonly exist in the market today, the Symons Cone and the Spider Cone. 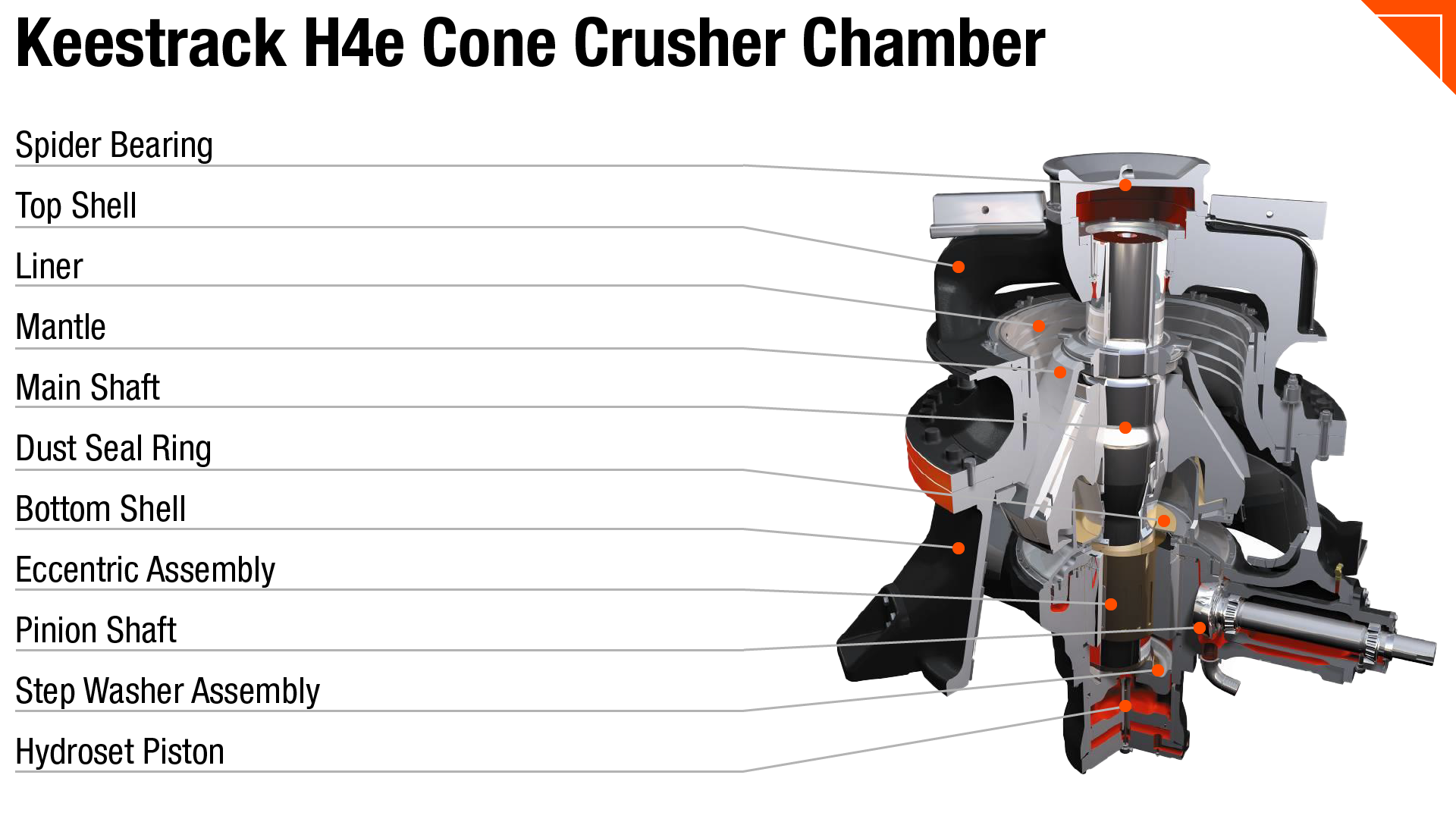 A Cone Crusher utilises a Mantle on an offset shaft (the amount of offset is called the eccentric) that oscillates around the fixed circumference of the Liner (also called concave). Material is fed into the Cone where each revolution hits and compacts the material, crushing it, as this happens the material then moves further down the Liner until it passes the nip point.

The key part of this crushing process is the Liner Type, Mantle, Eccentric and C.S.S., each of these, are customisable to suit the input material and size and desired output product. 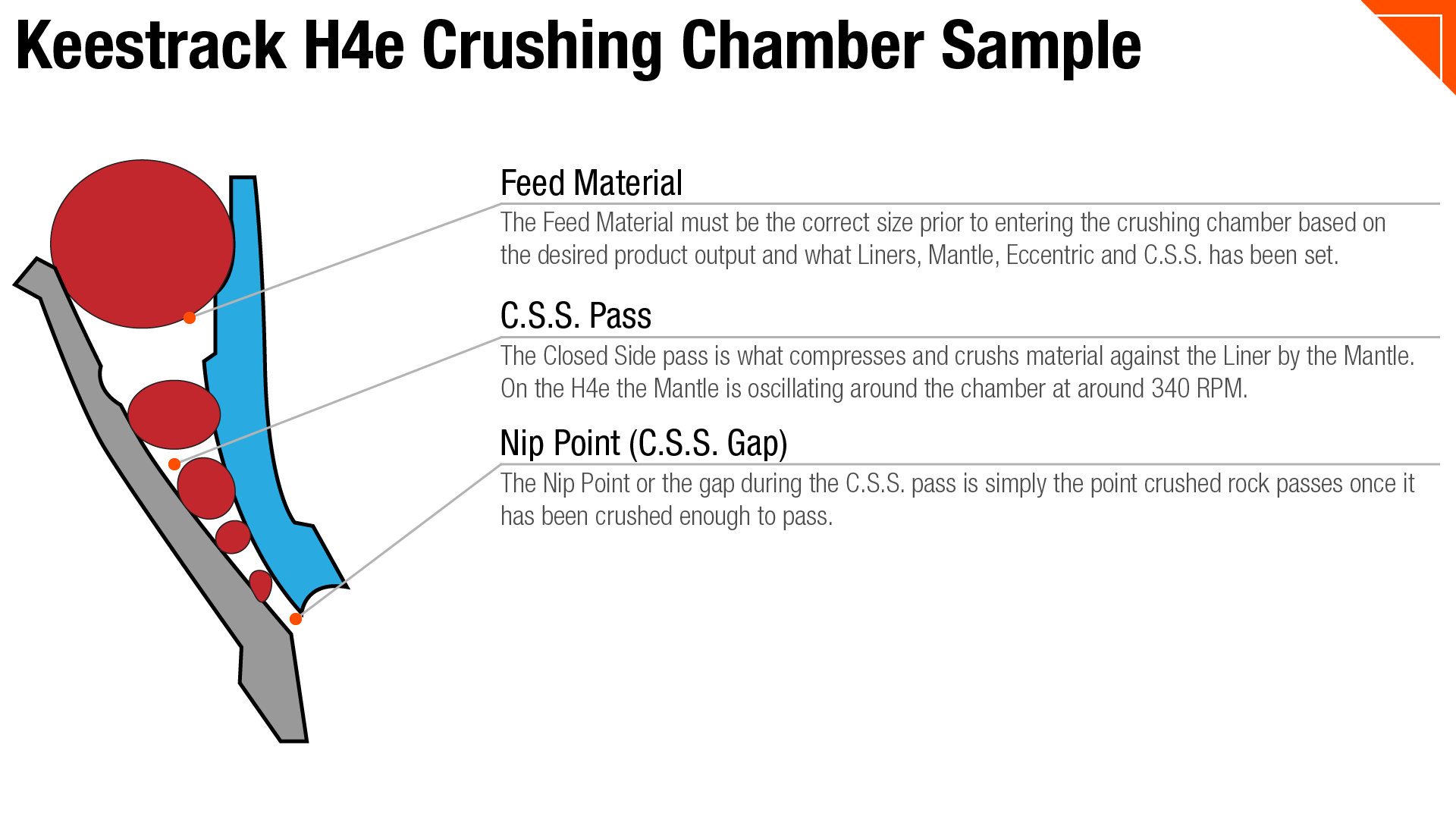 Mantles and Liners are one of the areas where Cone Crushers start to differ from other Crushers like Impactors and Jaws. Other Crushers allow a wide variety of in-machine adjustments to adapt to input feed and desired output; Cone Crushers rely on customisation to achieve this.

Two of the commonly customised parts on a Cone Crusher are the Mantle and Wear Liner.

The Keestrack Cone utilises two mantle options; A and B, which are simply two different sizes for fine or coarser applications. Most Cone Crushing operations working in varied crushing environments will own both mantles types and change them out based on the use-case and desired product size range.

The Liners in the Cone Crusher is where most of the wear part customisation comes in, The Keestrack H4e and H6e offer seven different liners that coupled with the Mantle provide a full spread of coarse to extra fine crushing options. 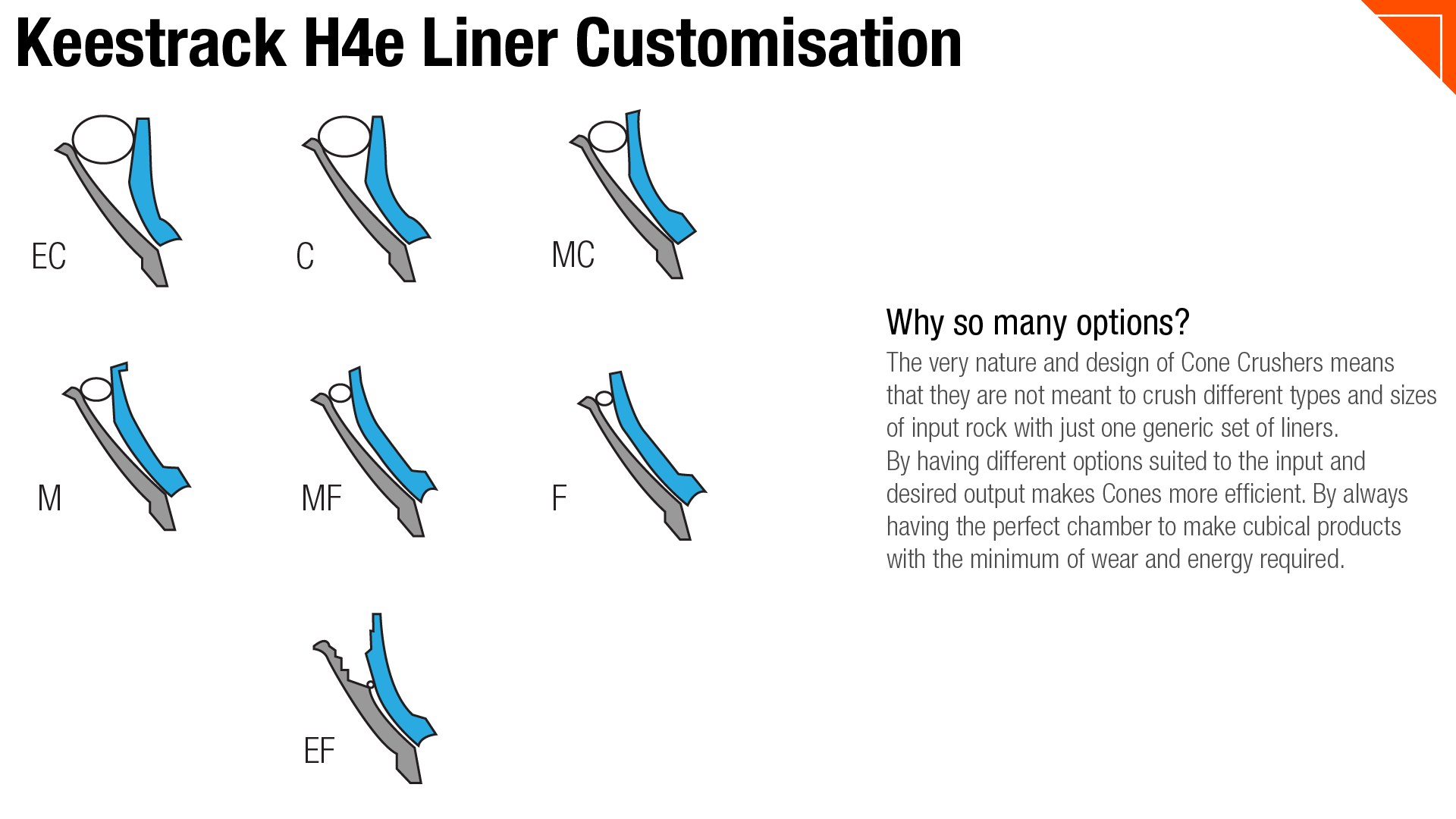 Having this many different chamber options allows for efficient crushing of the input material to the desired output product. The right Liner fully utilises the amount of crushing forces in the chamber, has better wear characteristics and produces a well-shaped product.

Selecting the right Liner is based on the desired end product, where applicable the Mantle will also need to be changed to suit the very coarse and very fine spectrums.

The Eccentric throw is the variance of angle which the Cone's Main Shaft operates. The angle is measured by how far off-centre the shaft is. A larger offset means a higher reduction ratio with the C.S.S. decreasing (closer to Liner) and the O.S.S. increasing (further from Liner).

Keestrack's Mobile Cone line makes this task simpler for operations to perform this efficiently. One of the benefits to a Spider Cone is its mechanical simplicity, and it utilises a unique keyway function on the Eccentric Bush that can be lifted and shifted to change the Eccentric offset that suits the Liners in the chamber. 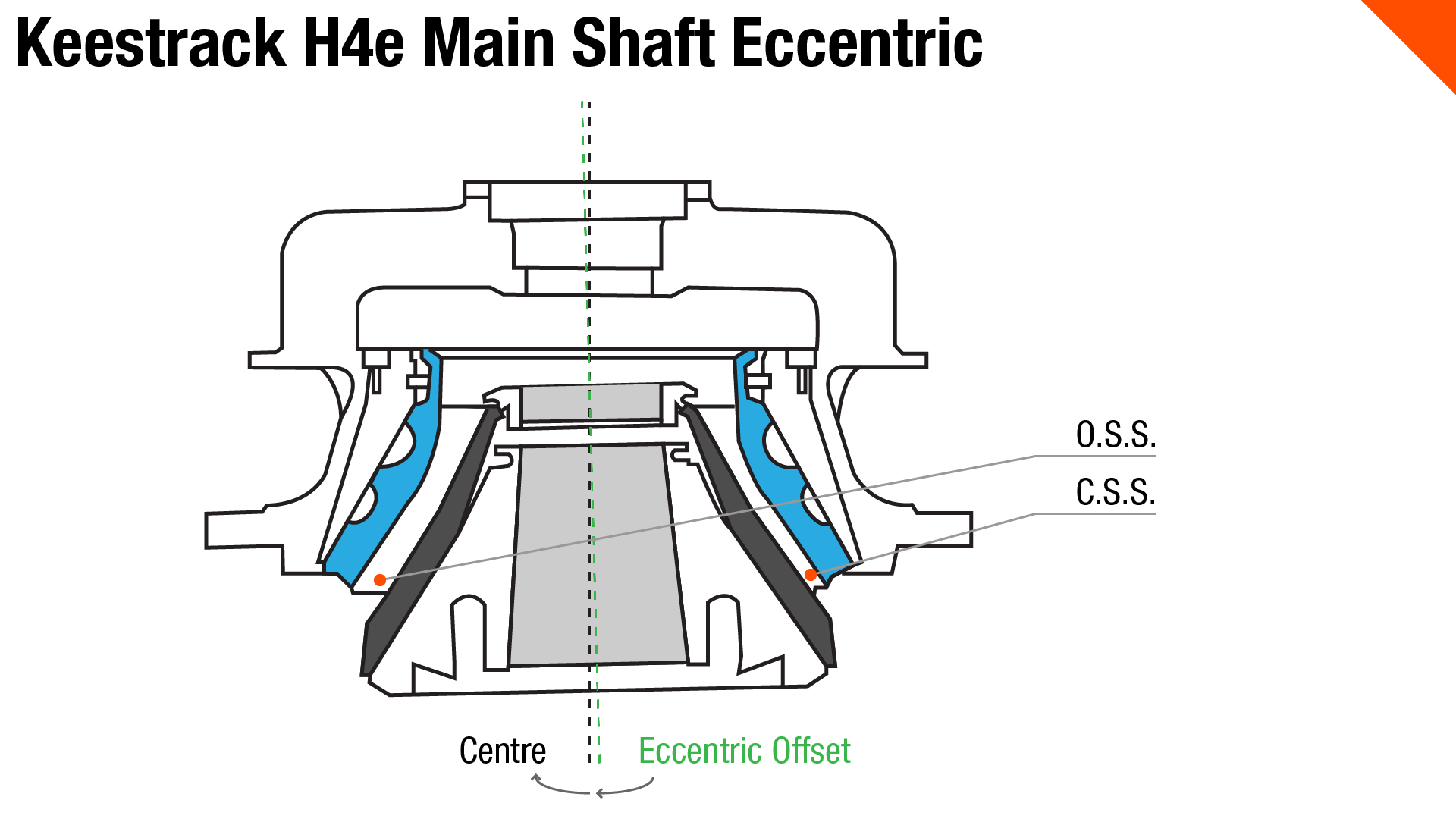 Adjusting the C.S.S. on a Cone is tied in with the Liner, Mantle and Eccentric which determines the G.A.P. size. Cones have in-machine adjustability via a Hydroset hydraulic piston at the bottom of the Main Shaft. This piston pushes the Main Shaft up or down to adjusting C.S.S. opening at the Nip point.

Much like Keestrack's Jaw Crusher line, Keestrack's Cone Crusher line utilises Hydraulic and Electronic monitoring and protection circuits to protect the Cone from damage from packing and uncrushable materials.

The first of these protections is the Hydroset piston which allows for slight movement to the C.S.S. during high load crushing. An accumulator on the ram allows for movement while maintaining Cone Pressure during peaks. Still, in the case of packing or large immovable material, it will relieve pressure to drop this material out.

The P.L.C. also monitors the direct load on the E-Motor powering the Pinion Shaft, and if this exceeds the safety threshold will stop or reduce power and speed to the Cone Chamber to avert damage. 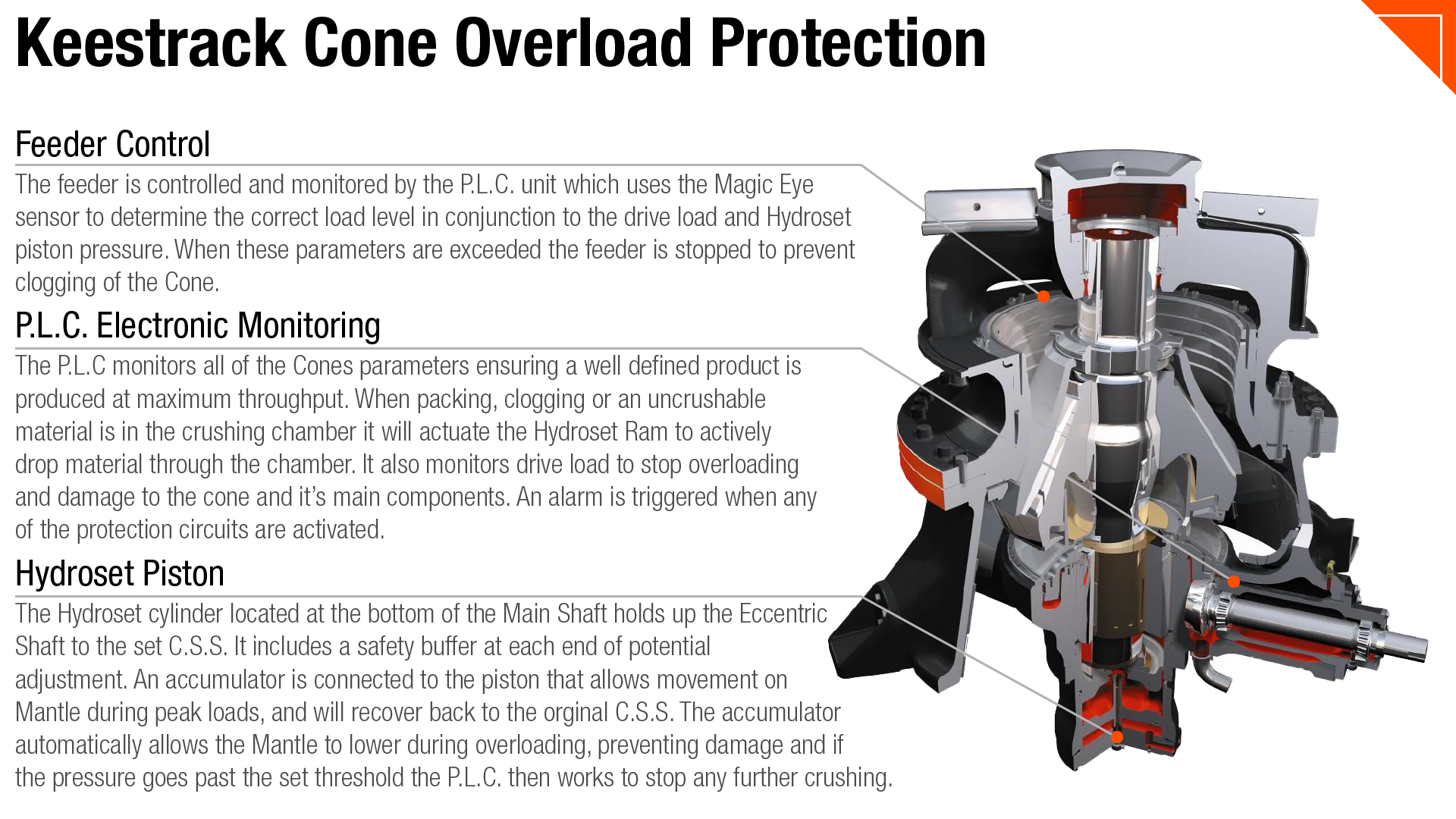 As mentioned above the main difference between a Symons Cone and Spider Cone is the use of a bearing suspended above the Cone to secure it.

The difference though amounts into a substantial change of mechanical complexity, reliability and strength. Spider Cone Crushers key benefits are:

How the Keestrack range of Cone Crushers achieves a more profitable product:

The Fixed Spider Head Cone Crusher allows Keestrack to utilise C.L.P. liners that enable operations to operate the Cone to the full Liner life without the need to adjust the C.S.S. halfway through the Liner life.

Keestrack's Cone Crusher range are Hybrid powered, which in comparison to regular diesel-powered Cone Crusher uses 50% less fuel. By integrating E-Motors energy, efficiency is boosted to 95% over hydraulic motors that are only 75% efficient.

Sensors located throughout the machine monitor load, fill levels and capacity. The P.L.C. can report on what the Cone Crusher is doing at any moment in addition to working in the set range, keeping the crusher running efficiently and at capacity.

The smart features add to the Cone Crushers productivity. The wireless remote enables total machine adjustment and even tracking while crushing.