An Impact Crusher could be described as a ‘rock smasher’ via a fast-moving rotor with a large mass hitting the rock, causing it to fracture. In this article, we’ll delve a little deeper into the principles of impact crushers and how they work to produce in-spec aggregate products. 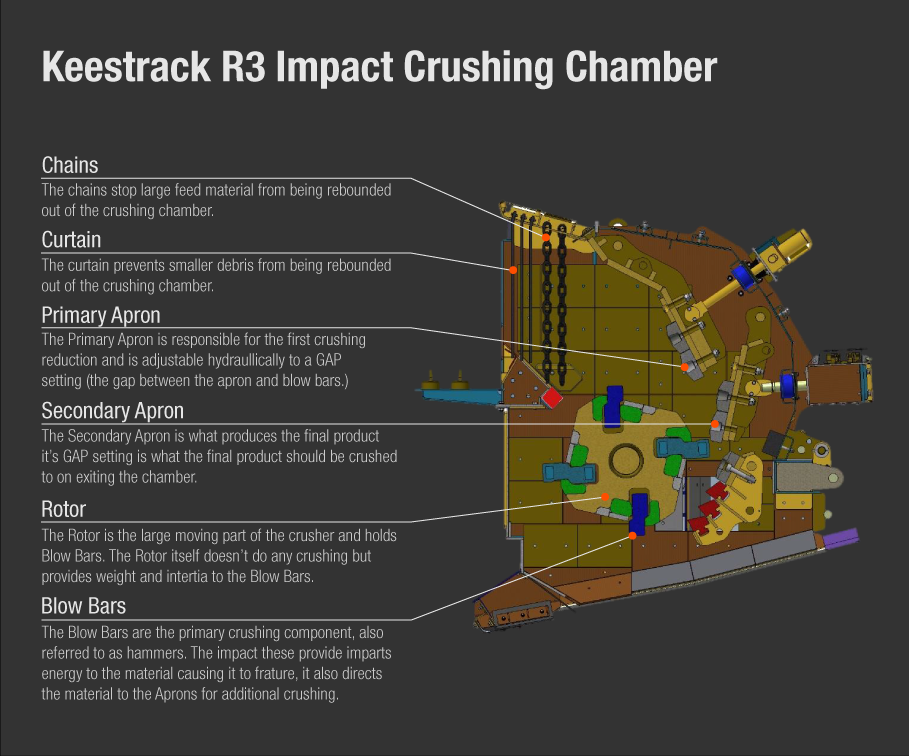 An Impact Crusher has more adjustability and variability to its operation than a Jaw or Cone crusher; this is due to its ability to fulfil both of these crushers roles in one machine, that is primary and secondary crushing.

An Impact Crusher can reduce an input material to a higher ratio than a standalone Jaw or Cone Crusher; it does this via the use of two aprons suspended over the rotor. Each apron is responsible for 1/2 of the crushing reduction with the 1st apron responsible for the primary crushing operation and 2nd apron fulfilling the secondary crushing; each usually set at 1/3 jumps. 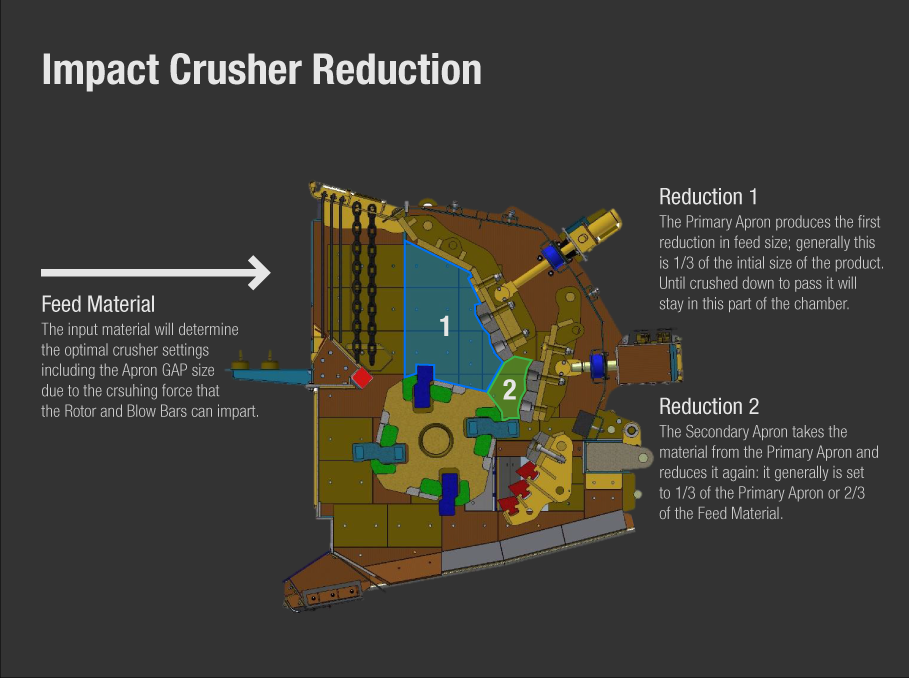 A suitably set up Impact Crusher will have feed pushed through the crushing compartment at 65% capacity (generally speaking, more fines will mean a lower capacity to reduce clogging). The reduction ratio of an Impact Crusher is stipulated in the operating manual; in this example, we will use a Keestrack R3 which is capable of a 1:10 reduction ratio by itself or 1:20 with an after screen and oversize recirculation conveyor. 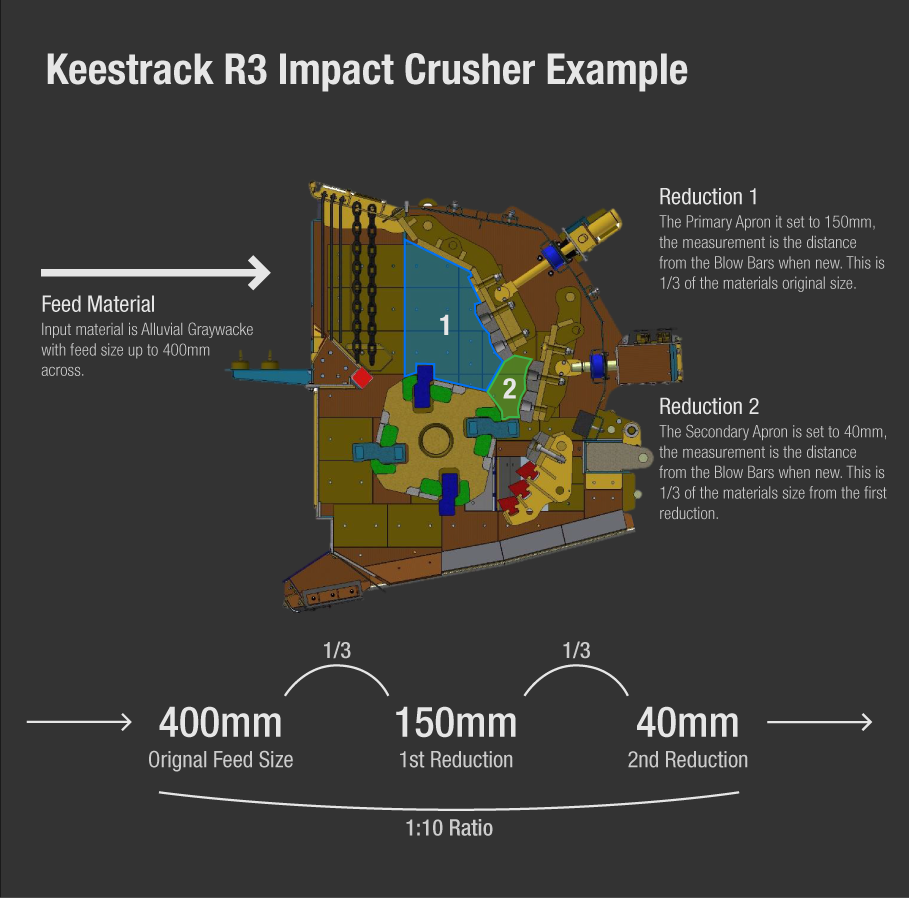 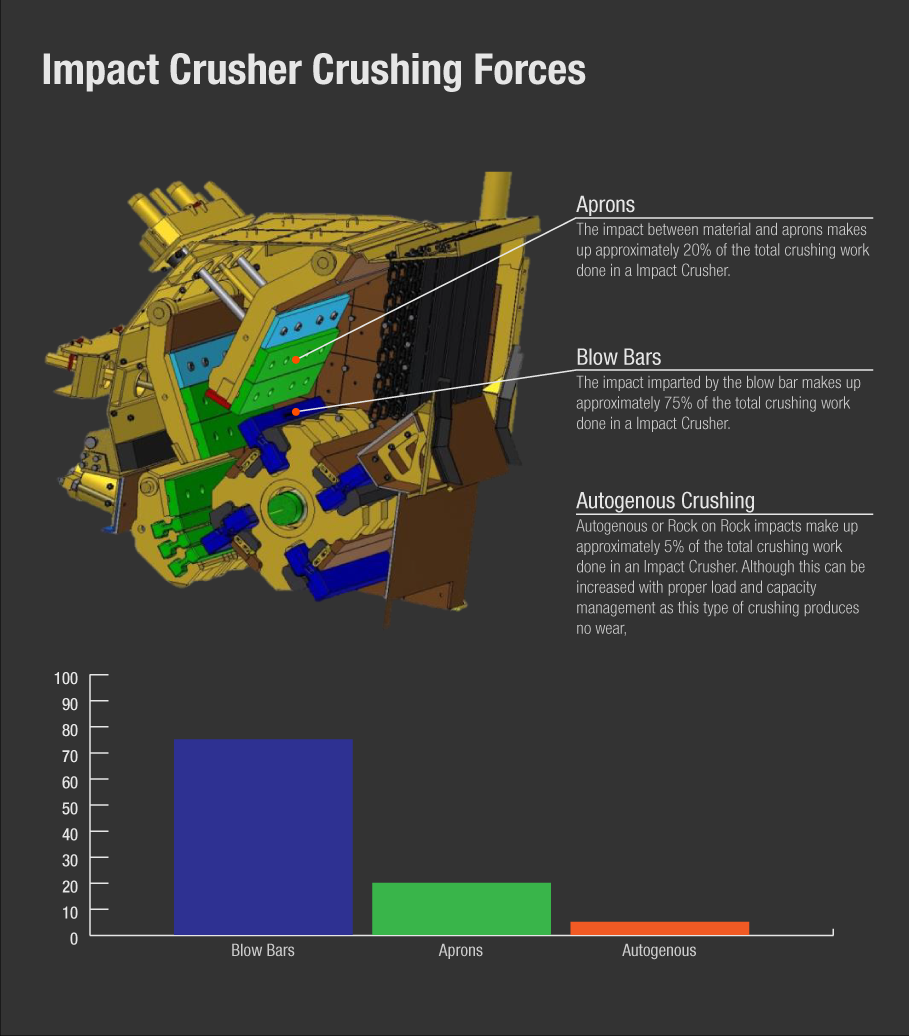 This would is an ideal crushing scenario, as feed material can be highly variable and of different hardness’s.

Below are some factors and how Impact Crushers can be set up to compensate:

How Keestrack Impact Crushers Save Money in Primary Crushing Applications

Impact Crushers when initially introduced to the market were almost exclusively used as secondary crushers to reduce consistent feed size to a well-graded cubical end product.

Since being brought to the market several decades ago, they have gone through numerous innovations and improvements, cementing them as excellent primary crushers for the last decade that can produce the same reduction ratio that two machines were initially needed to complete.

That’s not to stay Jaw, and Cone Crushers have been wholly replaced or superseded, these also have their place in quarry and crushing operations with features and benefits over Impact Crushers.

How the Keestrack Range of Impact Crushers produces a more profitable product:

Equip2 specialises in Mobile Crushing Machinery, learn more about Impact Crushers or Book a Demo with us by getting in touch.