Ray Berkett started Berkett Earthmoving 50 years ago in the burgeoning era of earthmoving in New Zealand. He asserted himself as a well-known family man and civil works company that rested on family values to run the business.

40 years on S.B.E's owner Shane Berkett is a second-generation Hawkes Bay earthmover who forms a pillar of the wider family business Berkett Earthmoving. While Ray concentrates on extraction and bulk works, Shane and S.B.E branched out to process aggregates and raw materials for Berkett Earthmoving and local contractors. Starting with just one wheel loader and a fixed grizzly screen 10 years ago, Shane soon added another loader and a Keestrack Explorer deck screen that moved the business into true processing.

A big part of this move into processing was the lack of availability of aggregates and differing specs of materials in the Hawkes Bay area. The Hawkes Bay region as a whole lacks large crushable rock, and has a lot of underlying sub 40mm alluvial. This lack of large rock has placed a constraint on suppliers ability to produce products like AP65 that are the goto foundation and drainage material for roading and residential housing.

Describing the change the Screen made to the business Shane says "it doubled our productivity, we were making 300-400 m3 a day with the grizzly to over 900 m3 with the Keestrack in a 3-way split. It's easy to cart around, set-up and feed with a Loader, which has made it ideal for shifting to different sites." 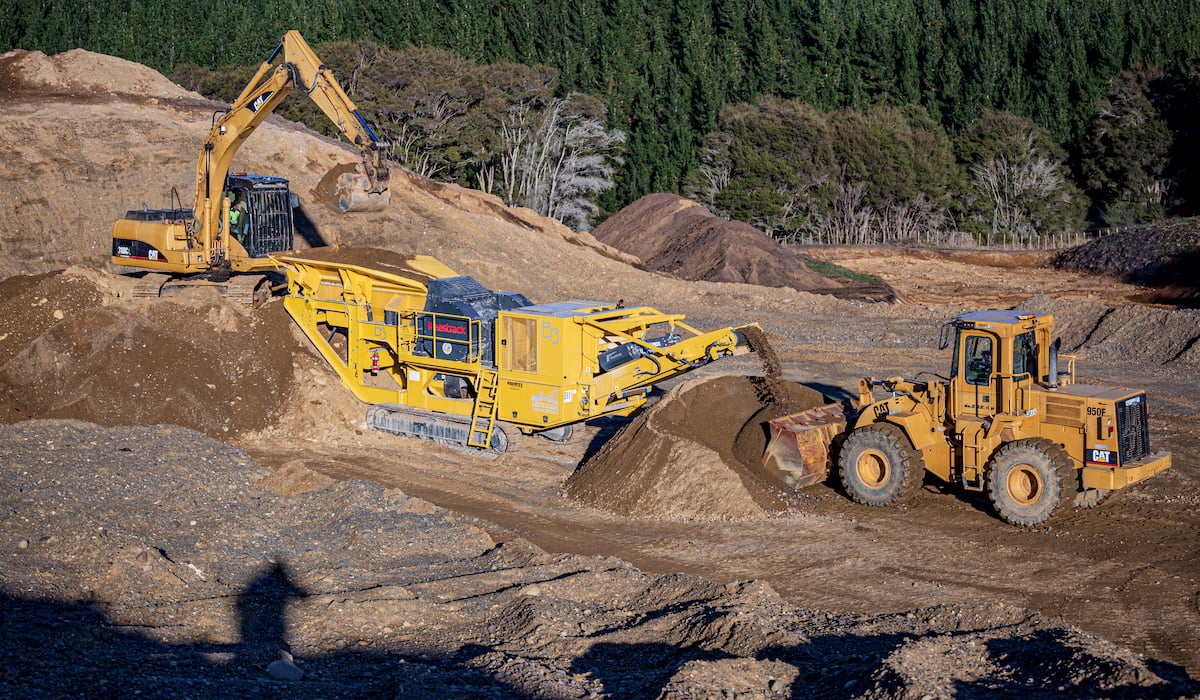 Not only did the Screen open up new products for contractors, it provided new aggregate sources to S.B.E with word quickly spreading that they can produce in-spec materials from a variety of sources. S.B.E now has over 20 material sources and quarries, and mid last year they added a Keestack B3 Jaw Crusher to increase their production ability.

The B3 quickly became a star performer and netted several new contracting jobs like concrete recycling and specialist aggregate production for projects that demanded more than just sub 40mm product.

"We've done a lot with the B3 already; it's a great crusher. It's easy to use, and everything is automatic. You can adjust the Jaw gap on the go, track it and crush and it'll tell you about anything going on." The built-in smarts, along with a user-friendly interface, have already saved Shane money in fuel and wear. In one case of crushing concrete, the end conveyor belt automatically stopped after detecting an oversized piece of steel between the magnet conveyor and belt, saving thousands in belt replacement and downtime.

"We crush everything with the Jaw, when we were looking at adding a crusher, Equip2 and Bert helped us select the best crusher for what we're crushing. Bert said that a Jaw would be best for our material in the Hawkes Bay, I trusted him, and it's worked out really well. We crush shale, red rock, alluvial and lime. The B3 crushes down to 65mm with all these materials."

Shane's brother Brendan who also runs an Earthmoving business and is a part of Berkett Earthmoving, specialising in sub-divisions and residential construction has seen a significant benefit from the S.B.E's aggregate supply. Previously sourcing materials from other quarries, Brendan struggled to get an adequate supply in time for future projects. By supplying Berkett Earthmoving's projects, S.B.E has also made bespoke graded and engineered products tailored to the engineer's specifications, exceeding regular gate products in the region.

It's this adaptability, portability and attention to detail in meeting engineer specifications and market demand that has helped S.B.E and Berkett Earthmoving expand their business to provide better services and products that outperform client expectations.

Working together Berkett Earthmoving have brought advanced crushing into a co-operative family business that rests on a strong set of family values.